Should we ever make a list of venues with the best entrances, it wouldn’t be complete without the Hermitage Amsterdam. The museum is situated at a great spot alongside the Amstel, with a beautiful 17th century façade which is as wide as the whole block. We make our way through a lowered gate – which used to serve as an entrance for suppliers – and walk under the building, to go up again and enter the large, open courtyard. We cross the courtyard and enter the foyer of the museum.

Inside awaits a modern interior, which is much lighter and more spacious than we’d expected from the outside of the building. On the ground floor lies a large lobby, which is connected to the café-restaurant on the second floor and the Auditorium on the top floor by means of a stairwell. These three main spaces combined allow for plenty of variation for any event. 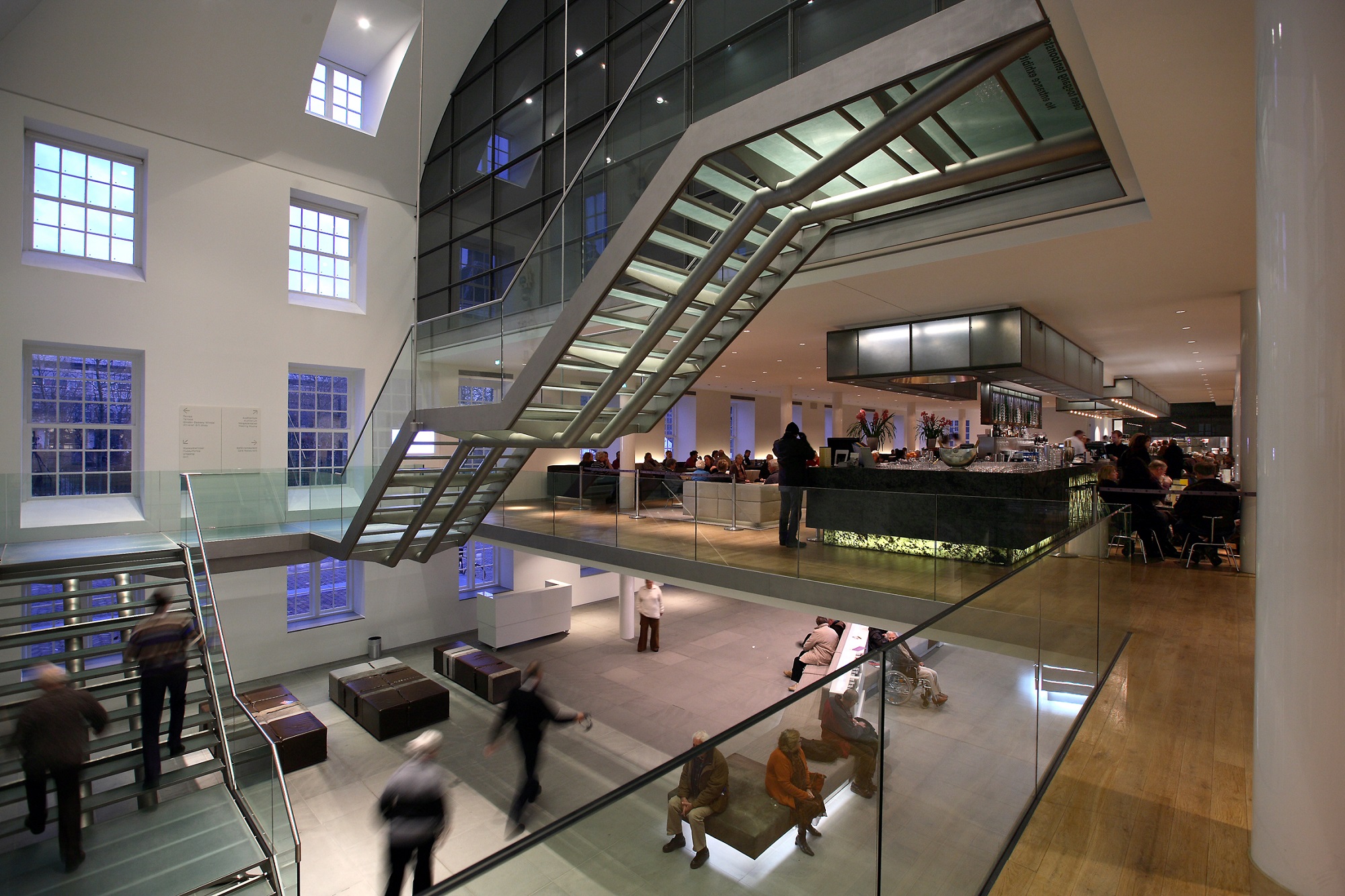 The Hermitage Amsterdam resides at the current location since 2004, but formerly in a smaller building. In 2007, the large renovation of the current building started, which was finished two years later. In 2009, the building opened in the impressive, renovated Amstelhof. The previous care home of the Diaconate is untouched on the outside, but the inside has been completely redecorated. Walls and ceilings have been removed, and the resulting interplay of open space and daylight has created a pleasant atmosphere. 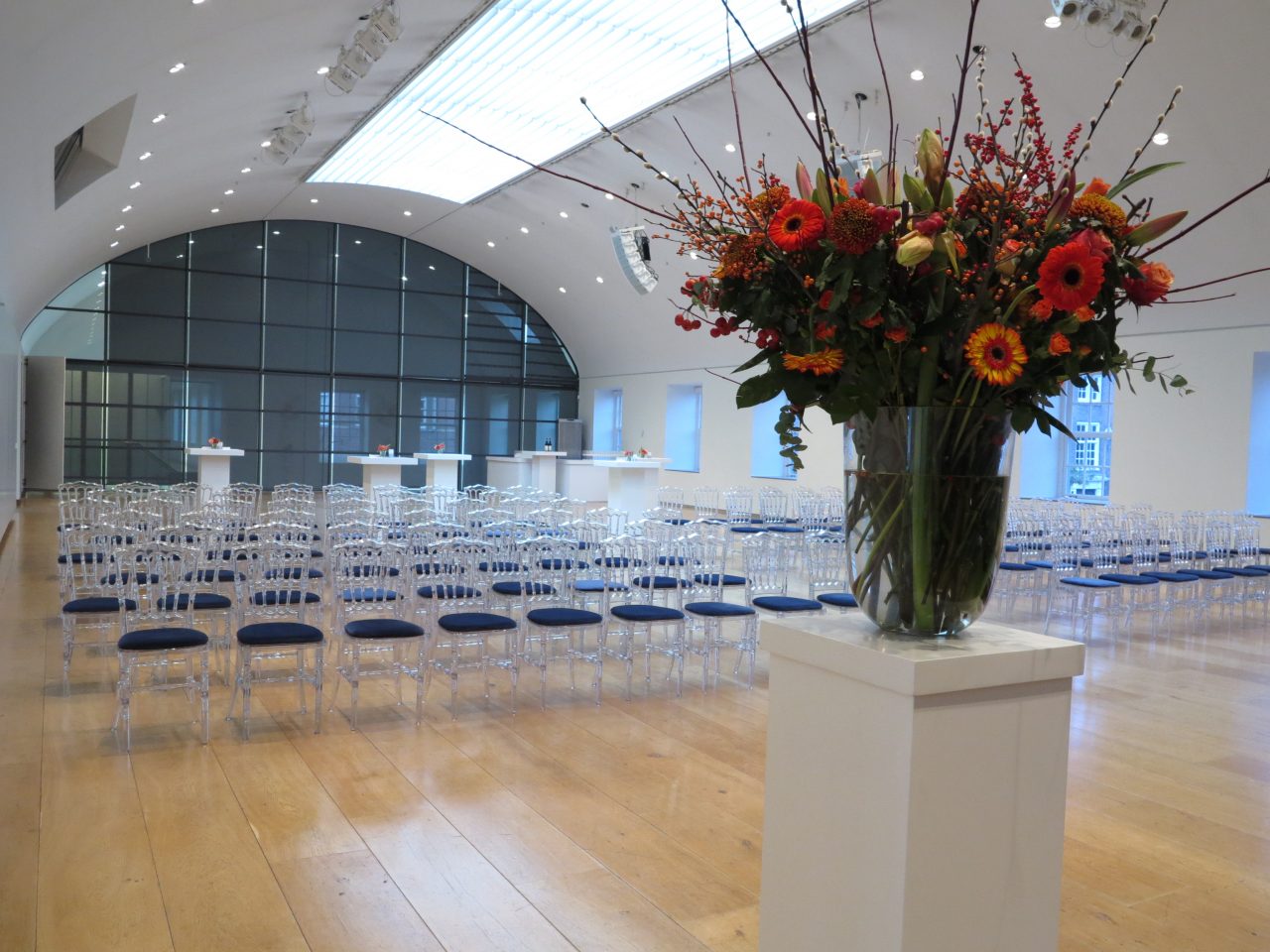 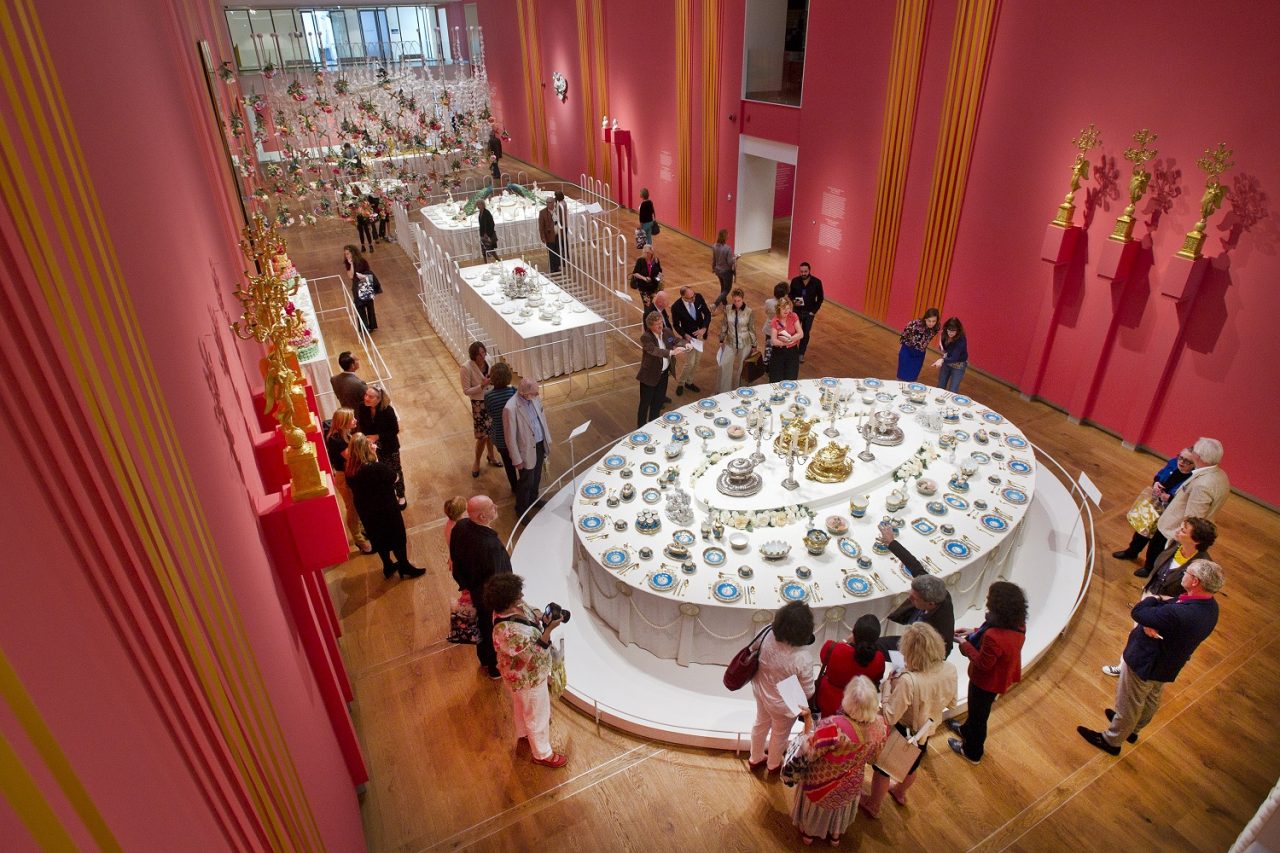 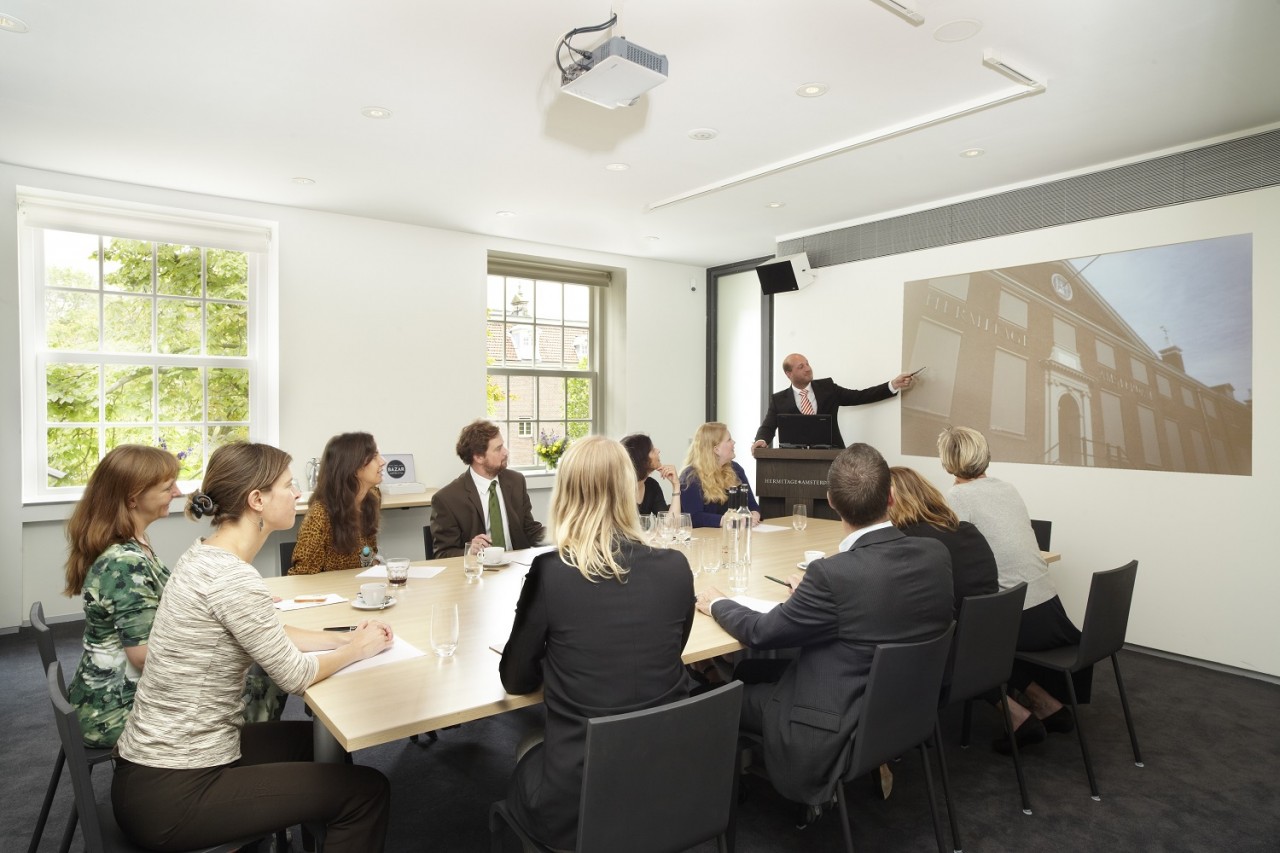 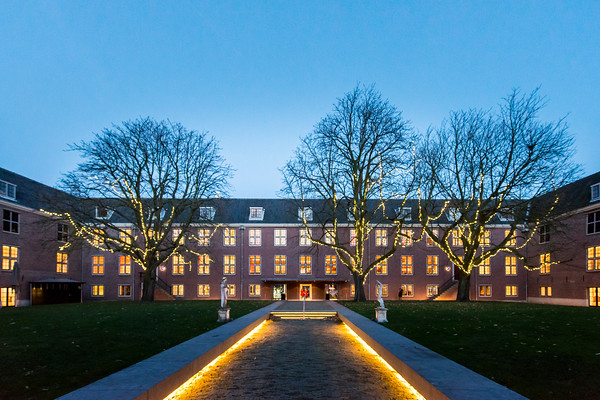 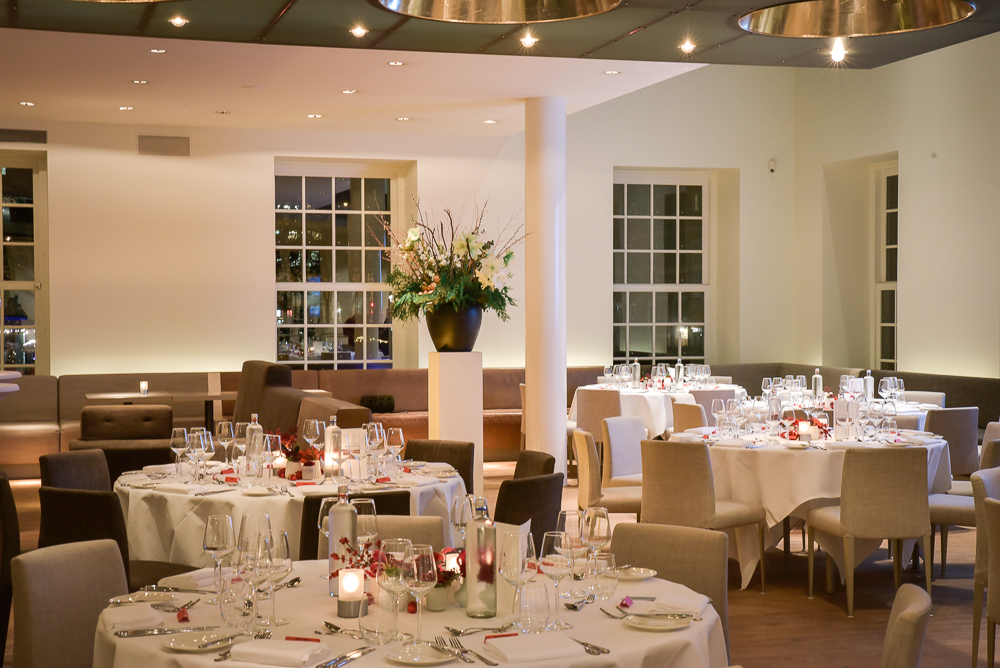 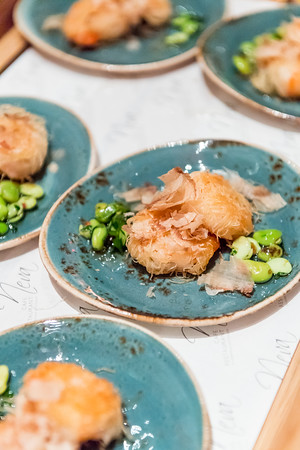 The main space for events is on the third floor, which is easily accessible through the large stairwell or the elevator. Adjacent to the stairwell is the Auditorium, which has its own cloakroom and sanitary block. The Auditorium is the largest event space of the museum, and it catches the eye all the way from the ground floor. There are glass walls on both sides of the Auditorium, which, in combination with the white walls, light-wood floor and windows, create a light and spacious look & feel. The freight elevator right next to the door allows for large objects, even cars, to be brought inside.

Right next to the Auditorium are three smaller rooms, named after classic Russian writers. The Chekhov Room and the Tolstoy Room are both suitable for meetings and small groups; the Pushkin lies in a corner of the Hermitage and looks out over the canal. This space is also well suited for presentations and dinners up to 40 people. Every space is fitted with all the necessary modern facilities.

The Hermitage Amsterdam offers a great combination of art, culture, hospitality and gastronomy. The latter is reflected in the café-restaurant, which can be found on the second floor of this wing. It’s a pleasant place to have lunch during a visit at the Hermitage. The menus are inspired by the temporary expositions in the museums, so there are often culinary surprises to be enjoyed. During the summer, the Hermitage Amsterdam boasts a beautiful terrace in the courtyard of the museum. The café-restaurant is also available for events, outside of the museum’s opening hours. The catering for events is also done by the museum, whether it be in the restaurant or one of the meeting rooms.

The Hermitage Amsterdam is a venue with a beautiful story and a highly experienced team that considers hospitality of paramount importance. The combination of the beautiful rooms, the exceptional location, the culinary surprises and the tailor-made service, allows for any event to be customized to the client’s wishes down to the smallest detail.