An Event Venue That Distinguishes Itself by its Extras

The grandeur of a 19th century concert hall, combined with modern architecture and design furniture. This remarkable building is one of the things that make this theater and event venue, the Philharmonie in Haarlem, so special. As one of the bigger event venues in the Netherlands, there’s a large number of halls, foyers, and subspaces to choose from. On top of that, there’s a modern menu and you can use an app, specifically for your event, free of charge. The extra care given to any event is noticeable. Reason enough to have a look at this unique location in the heart of the Haarlem city center.

As we make our way through the century-old streets of Haarlem, it’s easy to imagine how people in the 19th century, all dressed up in their fancy clothes, would walk to the Concertgebouw (Concert Hall) – the name of the venue back then. There was only one hall at the beginning, but many were added through the years by alterations and by adjacent buildings that were bought up and added to the complex. In 2001, the building closed for a major renovation lead by Dutch architect Frits van Dongen. In 2005, the venue opened again, now under the name Philharmonie Haarlem. A building where the classic and the modern are united in a special way. 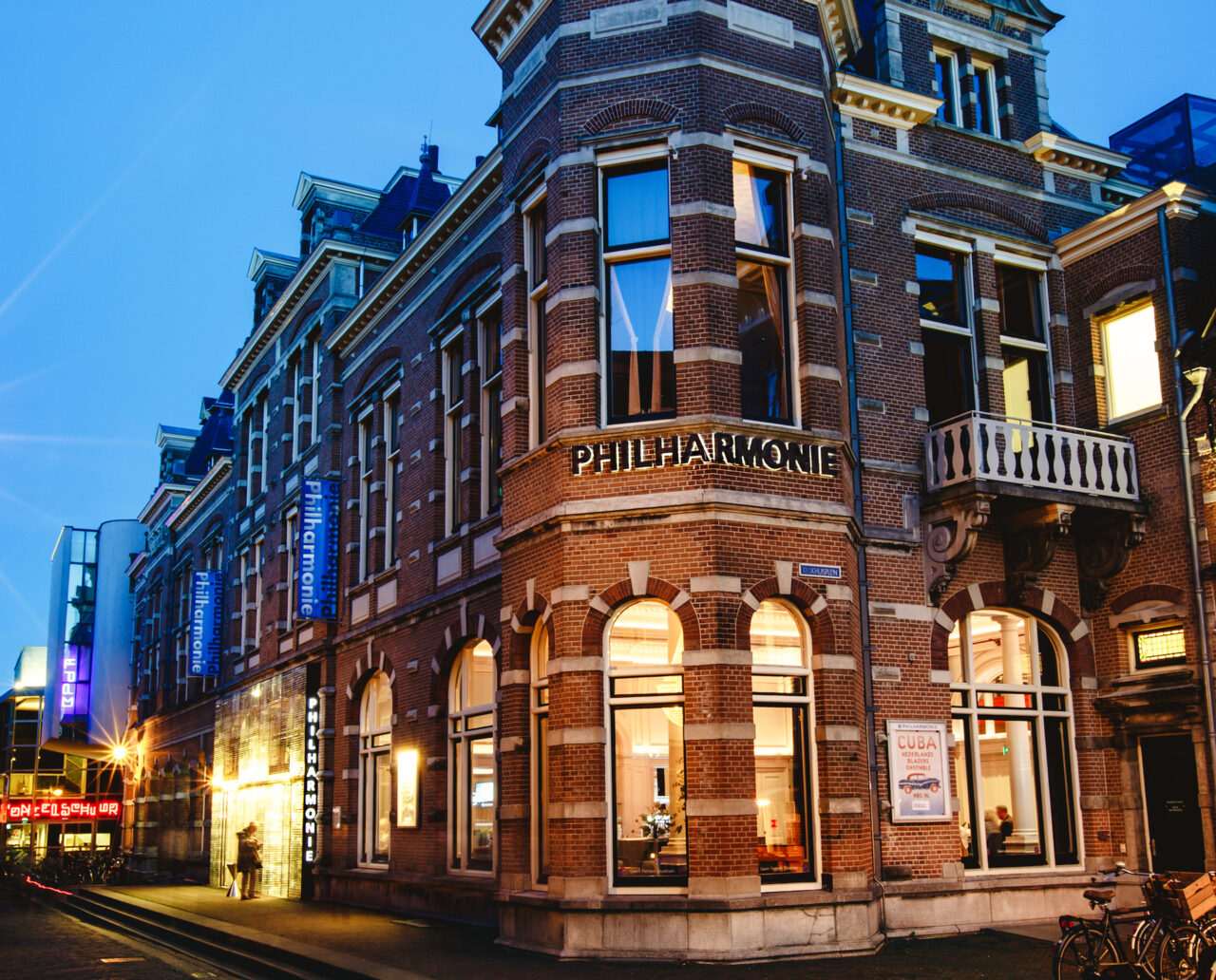 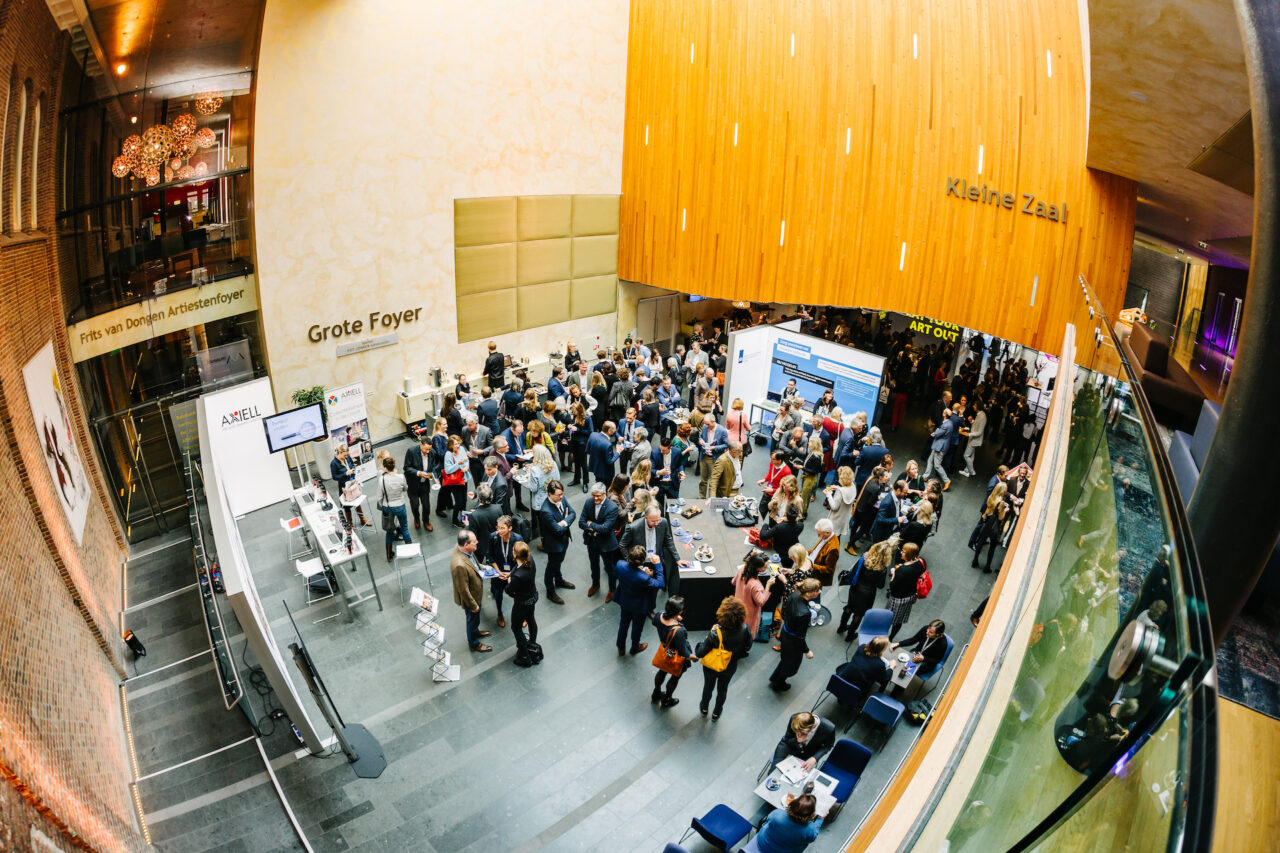 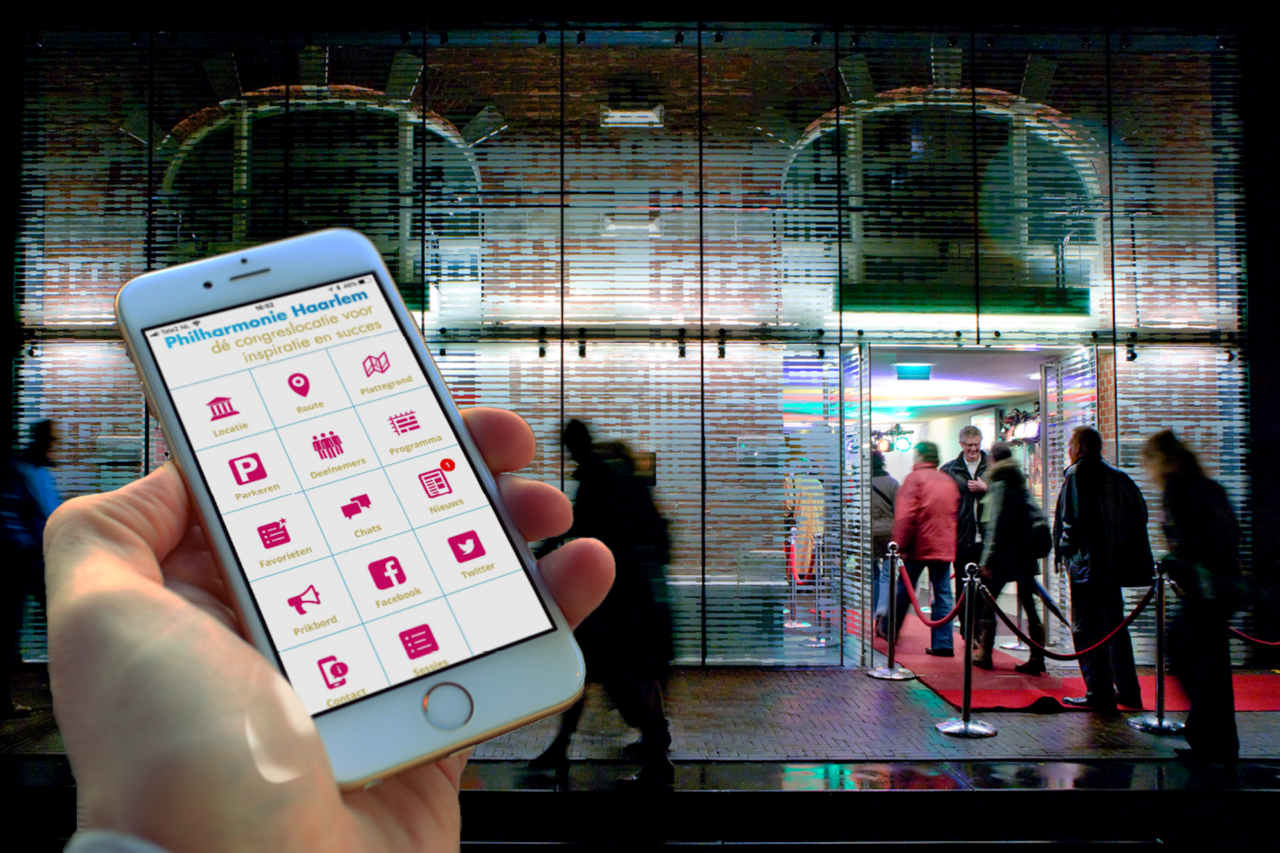 It’s impossible to imagine big congresses today without special apps for organizers and visitors of the event, but the service is usually pricey. The Philharmonie offers this service for free, with an app that has an itinerary to help guide you to the theater and an overview of the parking possibilities. On top of that, the app allows you to check the program of the event and it has descriptions of, for example, the speakers. You can also check the members of the congress. For a fee, you can make polls, send push messages, make a word cloud to show people at the end of the event, and participants can find each other more easily through the chat function. All easy-to-use possibilities that give events at the Philharmonie a little extra.

When we enter the building through the glass entrance, we arrive at the Grote Foyer (Grand Foyer). There’s always a porter at the entrance of this space that receives visitors personally and guides them. This is especially useful when there’s multiple events going on at the same time or on the same day. The Grote Foyer resembles a market square. It unites all the old and the new parts of the building through glass. Because of this, it’s a very light, grand and modern space, but still feels cozy because of the authentic exterior walls that are still visible in places and the natural materials that have been used in the renovation. The design furniture, made by young and talented designers, really catches the eye here. This design furniture can be found in all the foyers and the collection varies continuously. 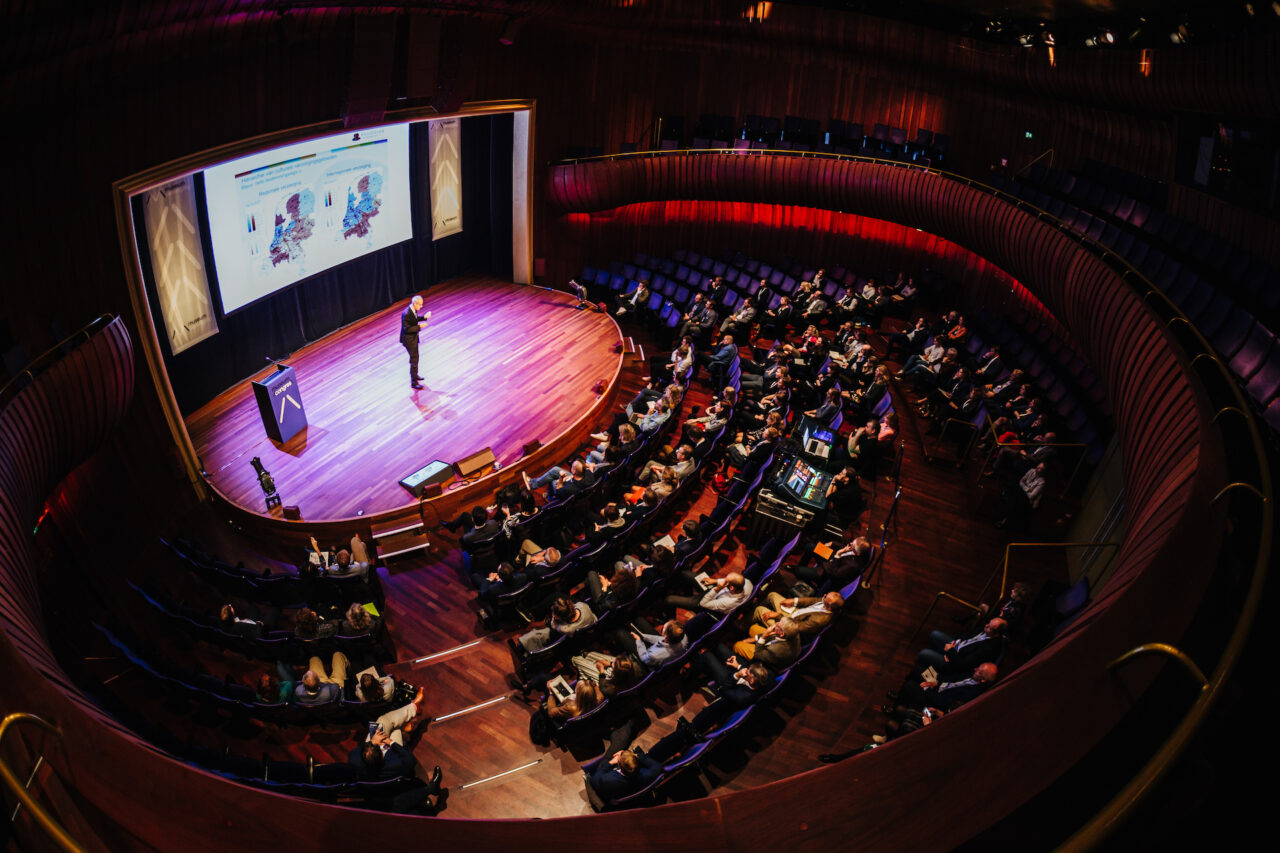 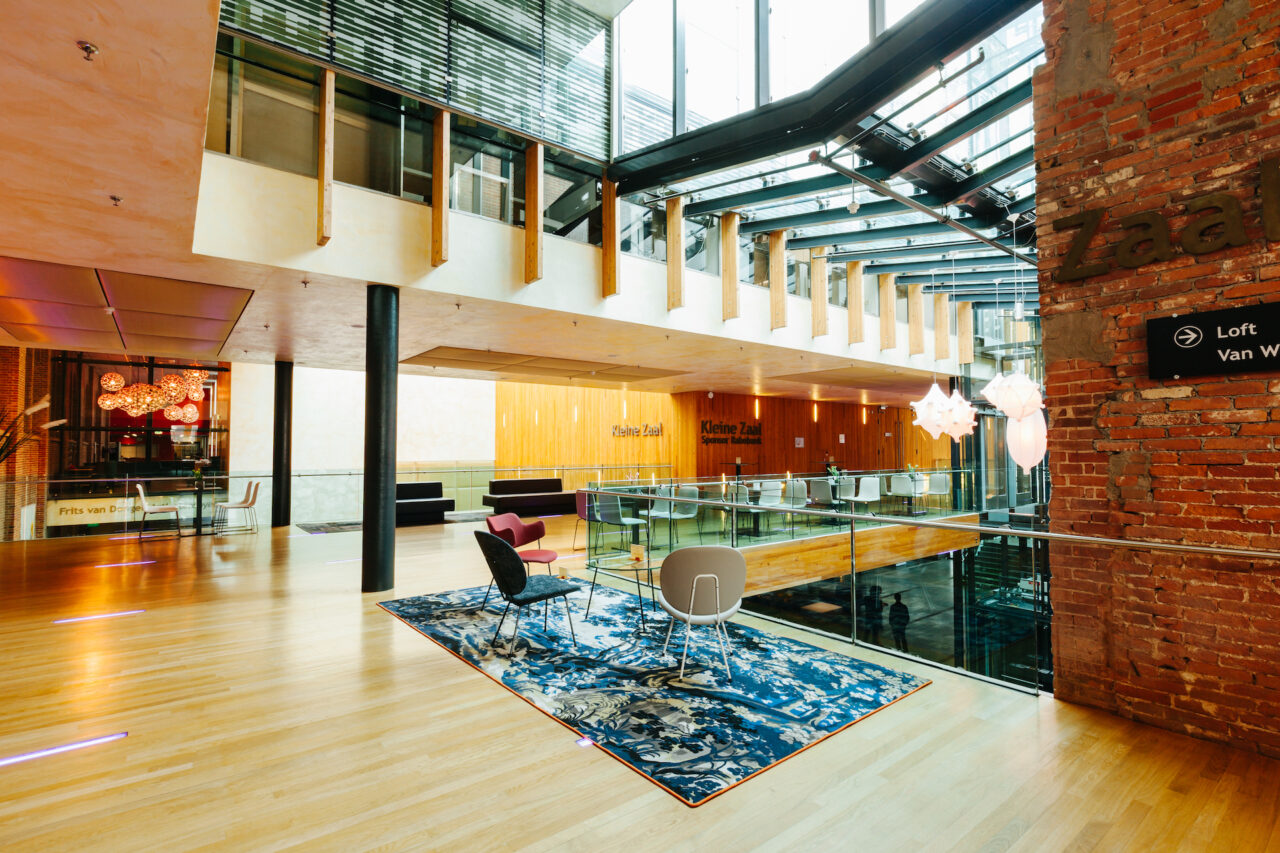 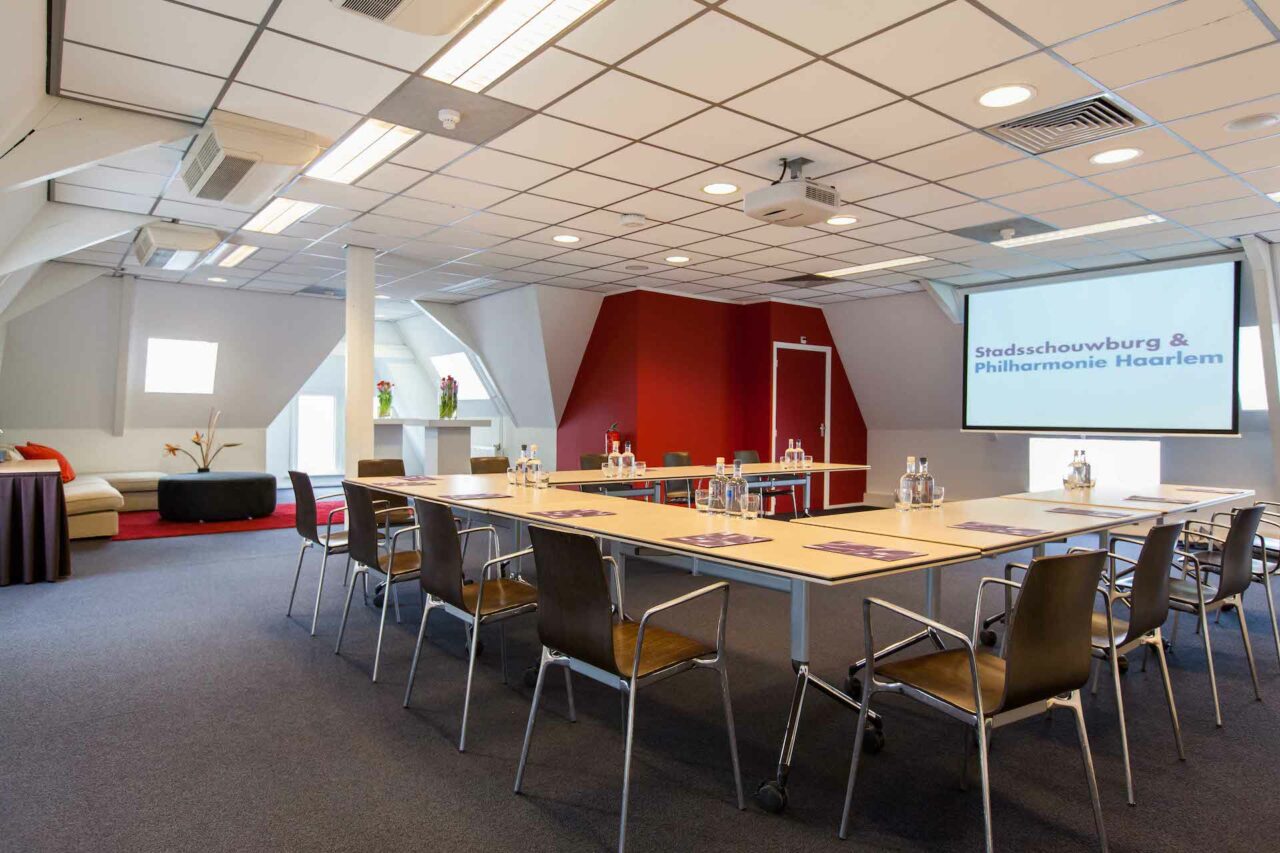 The Grote Foyer is often used as a reception or network space for a maximum of 1000 people. But the space can just as easily be transformed into a catering square with food stands, coffee carts and live cooking. There are plenty of options for foods and drinks to choose from, which the kitchen of the Philharmonie can provide, sometimes with help from their catering partners. There are some standard meat options, vegetarian options and even vegan options, so any preferences won’t be a concern. Fun fact: many of the food options have apple in it. This is a nod towards the apple orchard that was once in the place the Philharmonie is today, hundreds of years ago.

We walk up the stairs to the Boven Foyer (Upstairs Foyer) and the Kleine Zaal (Small Hall). Halfway up the stairs we notice that the glass of the building is covered with the musical notation of the organ music of ‘Klokken van Haarlem’ (Clocks of Haarlem) by Dutch composer Louis Andriessen. This composition was played during the reopening of the Philharmonie in 2005. The Kleine Zaal is a part of the newly built part of the venue, but still feels intimate and classical. The wooden balconies were built by hand by a shipwright for optimal acoustics. This hall offers all kinds of possibilities for presentations or congresses, including a professional team that is specialized in theater technique. The hall has space for about 400 people in total, but it’s also possible to use specially designed tables that can be put on the chairs, so guests have room for a laptop or papers. The Boven Foyer is light and it’s particularly suitable to be used in combination with the Kleine Zaal as a reception space or as a place to have lunch or dinner. 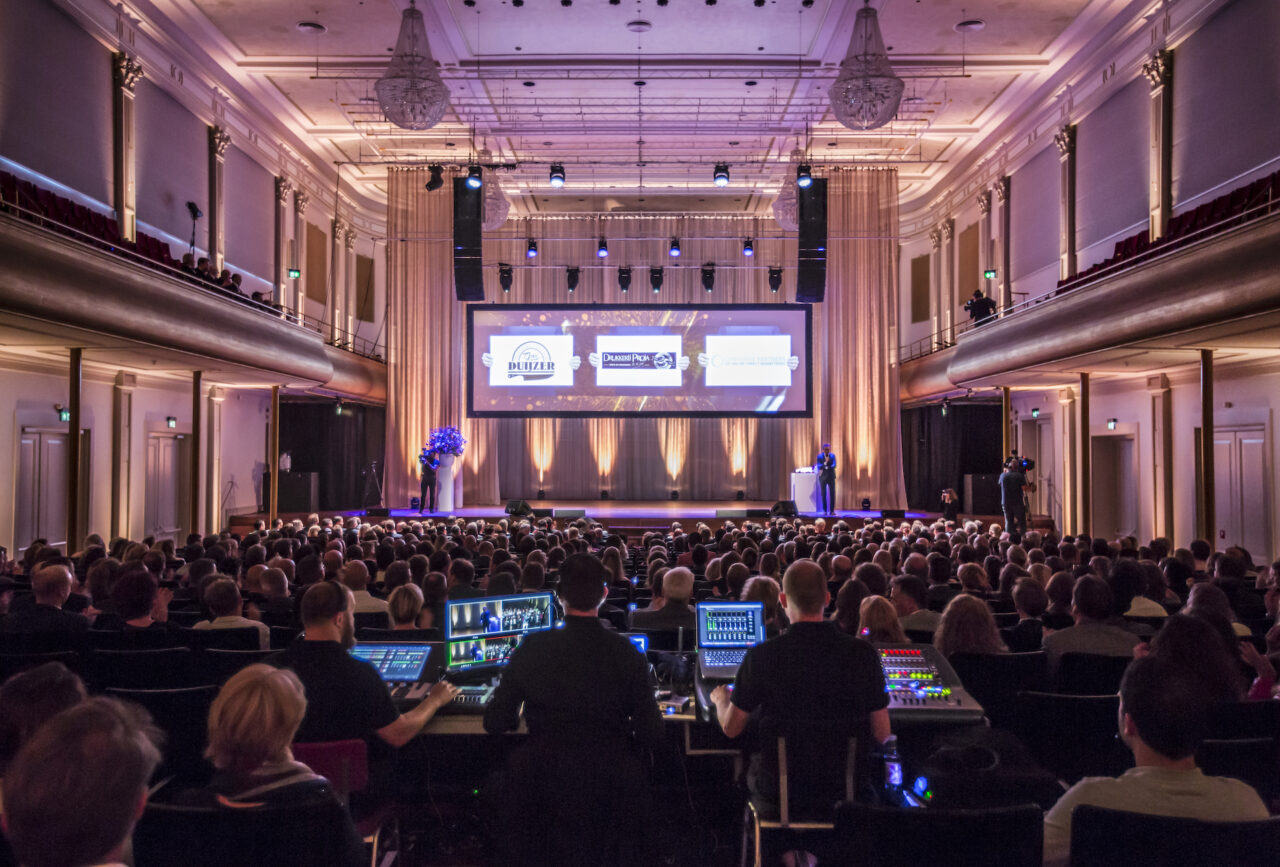 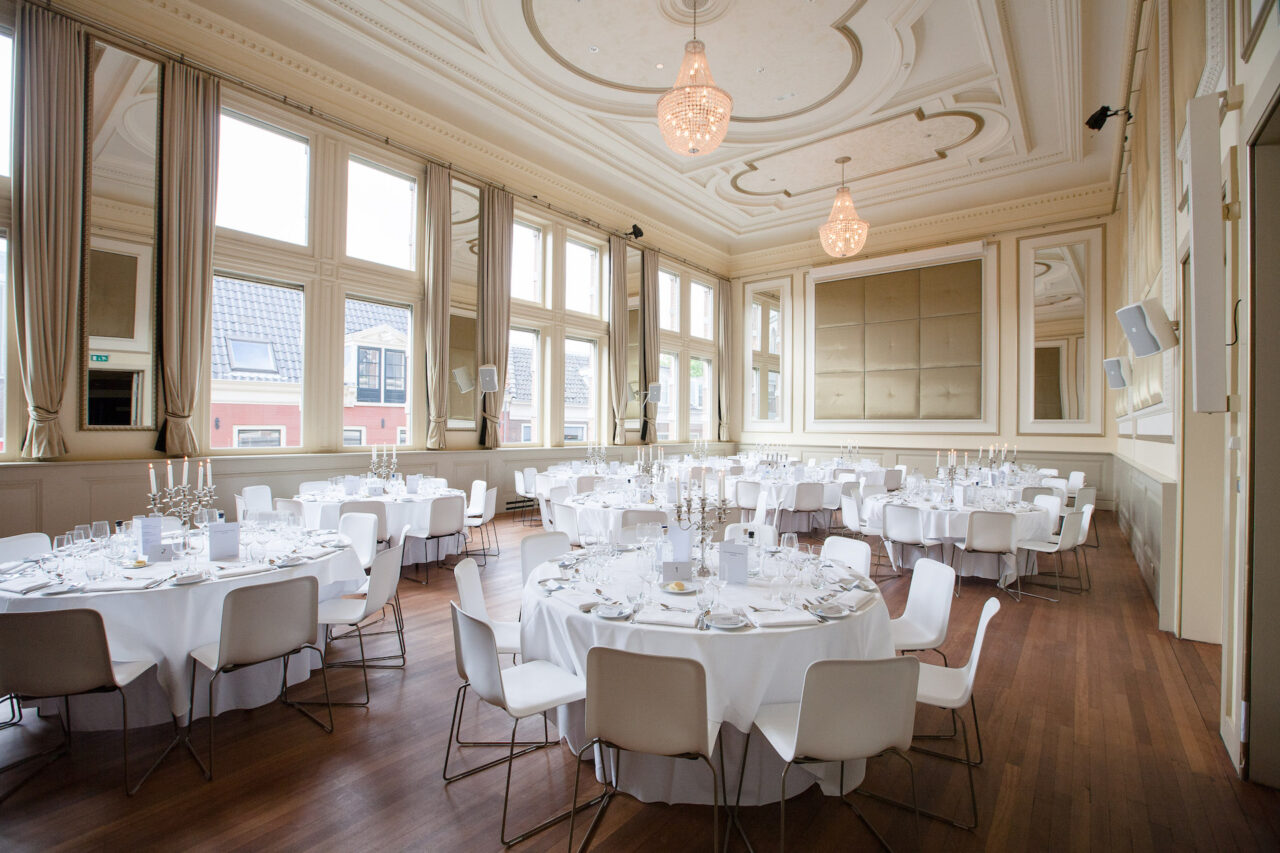 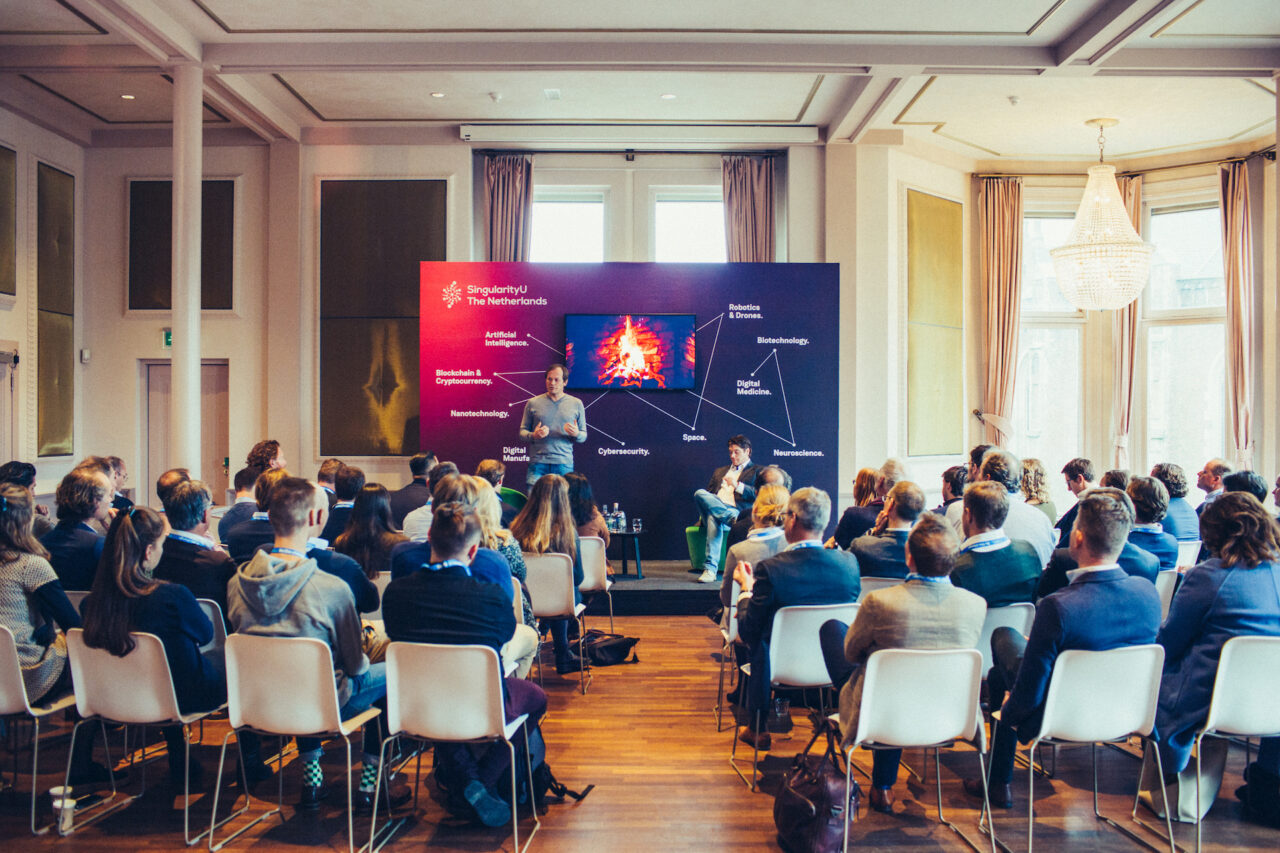 The showpiece of the Grote Zaal, which has multiple entrances on the ground floor and the first floor, is the gold-colored organ of the famous organ builder Aristide Cavaillé-Coll. The organ is still in working order and was used for the recordings of the Dutch tv-show Maestro, among other occasions. Though the showpiece is impressive, the rest of this hall is equally remarkable: everything has been restored in the classic 19th century style, including chandeliers. Beneath this classic appearance, though, are some smart technical gadgets. For example: the 1228 chairs on the ground floor can be removed and the upwards sloping floor can be leveled, so a large dancefloor is created. This allows for various arrangements for exchange fairs, parties and gala dinners. But the hall can also be divided into different parts, creating subspaces or, for example, a workshop on the stage.

The two halls on the first floor are reminiscent of the house they once were, before they were added to the Philharmonie-building. The Van Warmerdam Zaal (Van Warmerdam Hall) has wallpaper spun with gold wire, fancy chandeliers and pink curtains. There are a lot of windows that give the space a pleasant and light feeling, and they offer a magnificent view of the Grote Kerk or St. Bavokerk (St. Bavo Church). But of course, for a presentation the space can be darkened as well.

The adjacent Van Beinum Zaal (Van Beinum Hall) has a classic appearance as well, but feels more stately with its high ceiling. The many mirrors in this space make it feel even bigger than it is. This hall, which has its own bar, is often used for dinners, but congresses and presentations for up to 120 people are no problem.

Bordering on the Grote Foyer is the Blauwe Zaal (Blue Hall). Its name refers to the time during which this hall was often blue from all the tobacco smoke. Though there’s no more smoking in this room, the furniture is appropriately blue. This hall too has its own bar and it has a cozy café vibe. The perfect spot for subsessions, smaller receptions or to host a VIP-lunch. Additionally, the Blauwe Zaal can be added to the Grote Foyer by opening the monumental doors.

With all the options the Philharmonie offers, the perfect hall for any imaginable event can definitely be found here. On top of that, the back part of the building, which has a number of extra subspaces and meeting rooms, has recently been added to the already long list of available spaces –  ideal for when it’s very busy. The flexibility, the team that helps think about your event, and the extras such as the app, are all characteristic of the Philharmonie. Combine this with the professional theater technique, excellent catering options and the magnificent historical building, and you have a venue which is definitely worth visiting.