Textbook Example of a Successful Conversion Project in North Amsterdam

North Amsterdam is booming. Obscure grey industrial zones make way for creative breeding grounds, and one after another old industrial warehouse is brought back to life with a new purpose. The Kromhouthal is one such warehouse which was transformed from production hall to event venue – successfully. It has blossomed into a leading destination for events.

And whether that success is caused by the momentum of the Overkant site (the former industrial area on which the Kromhouthal resides), the popularity of North Amsterdam as a whole, or because of some clever decision-making by the owners; the end result is the same. Everyone who’s visited will agree that this a fantastic event venue. So it was about time GreaterVenues visited the Kromhouthal.

Immediately upon entering the Kromhouthal, the oblong shape of the warehouse catches the eye. The hall is about 140 meters long and, not including the break-out rooms and offices on both sides, about 20 meters wide. It’s shaped like a street, which makes it very suitable for exchange fairs. The hall is enormous and has a capacity of 2300 people.

Across the characteristic high ceiling are numerous crossbeams with cranes attached to them. In bygone days, these cranes were used to move around massive engines or parts of it. That history is still tangible today, and thanks to these preserved elements it’s visible, too. The cranes still have a practical use as well: They’re fully functional, so they can be used to lift heavy objects and large decorations can be suspended from them. 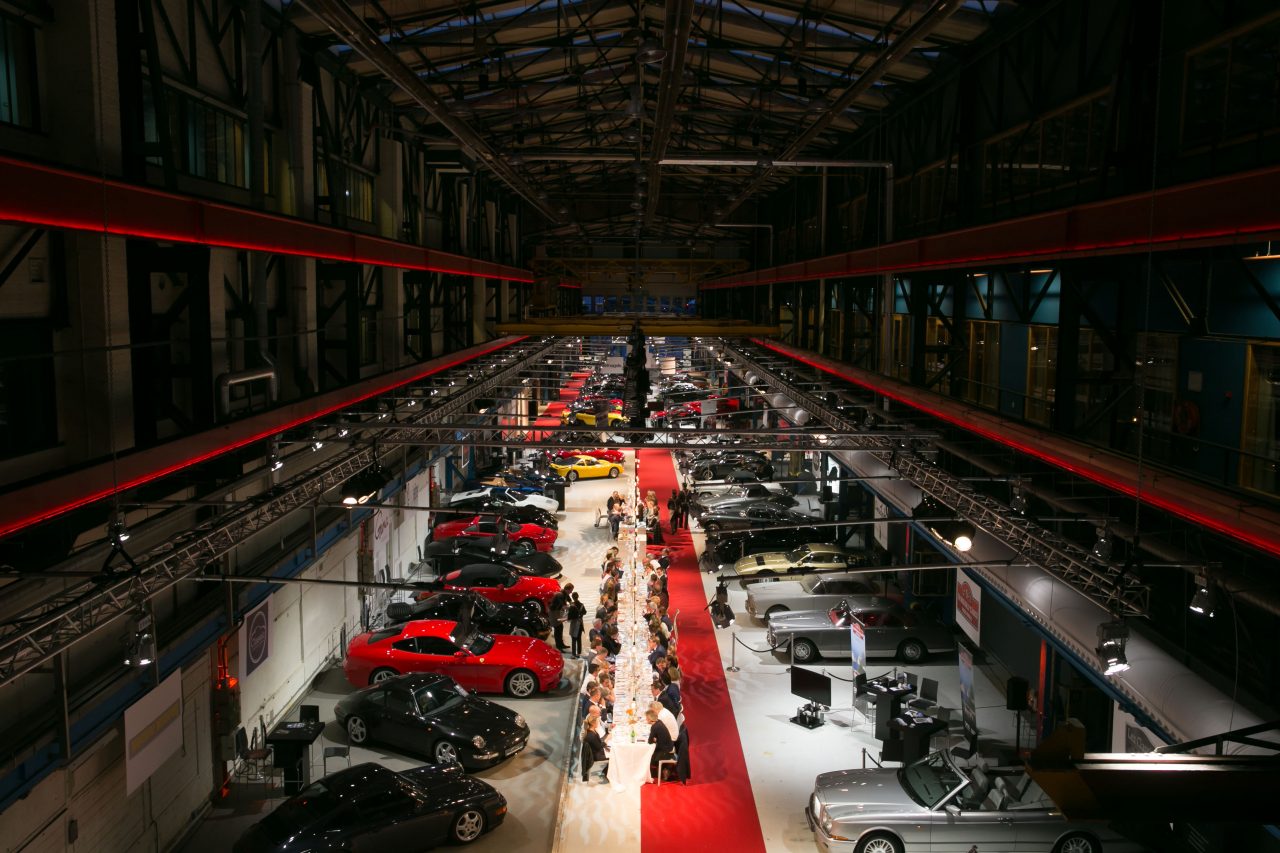 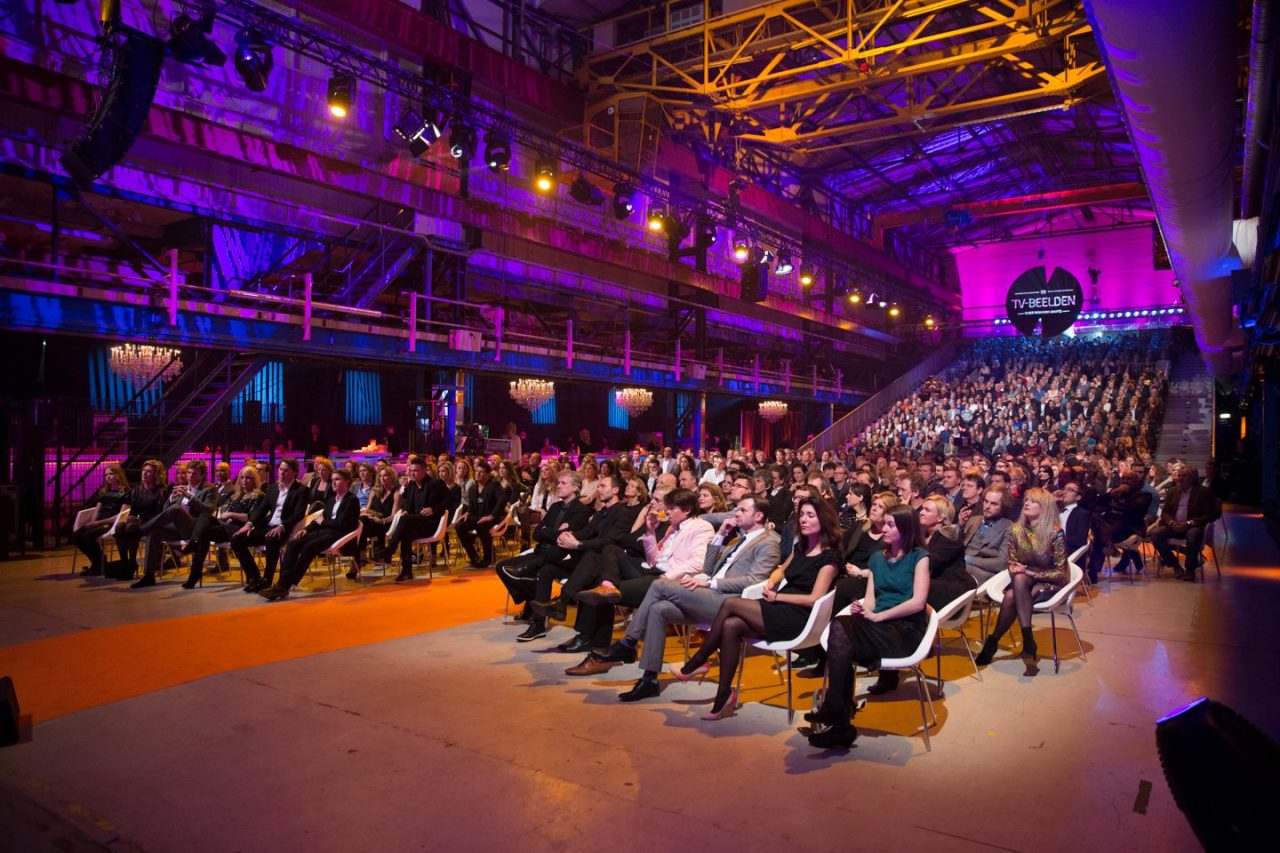 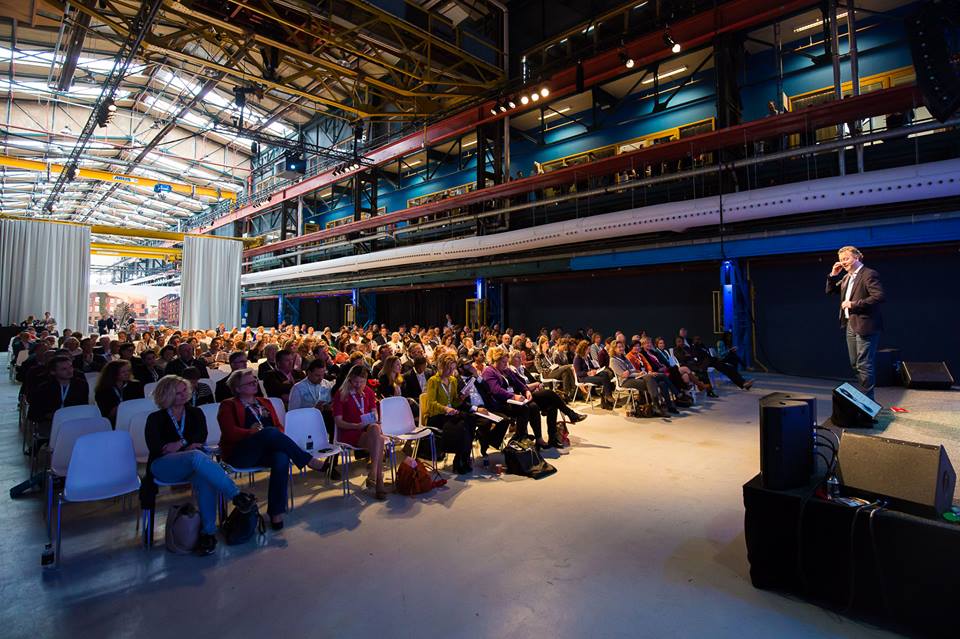 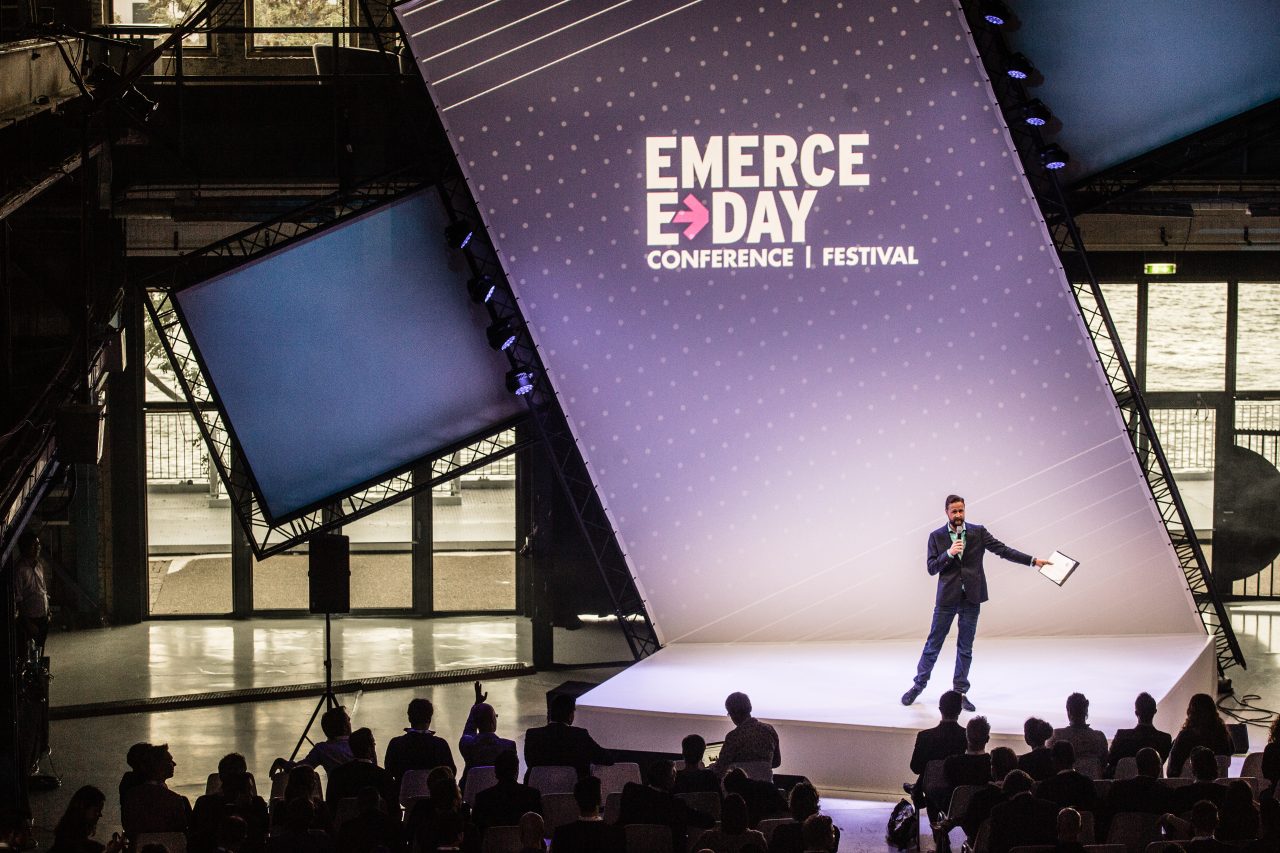 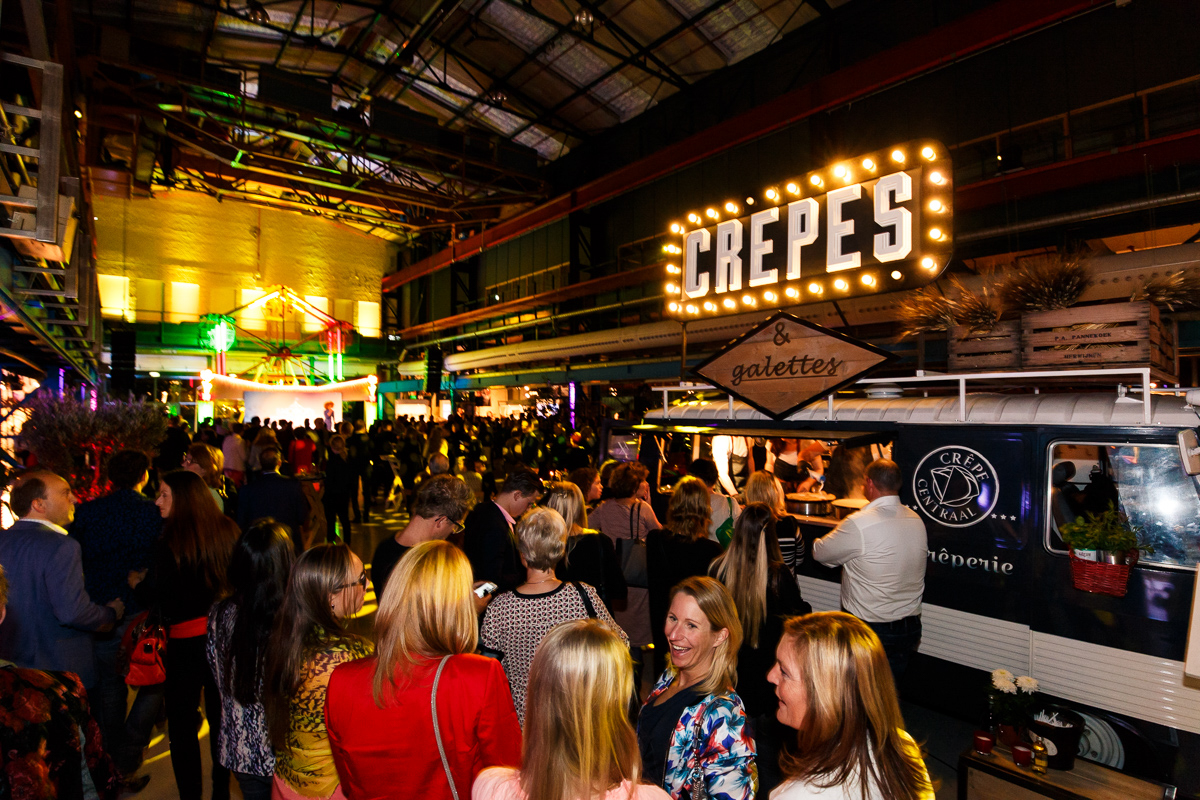 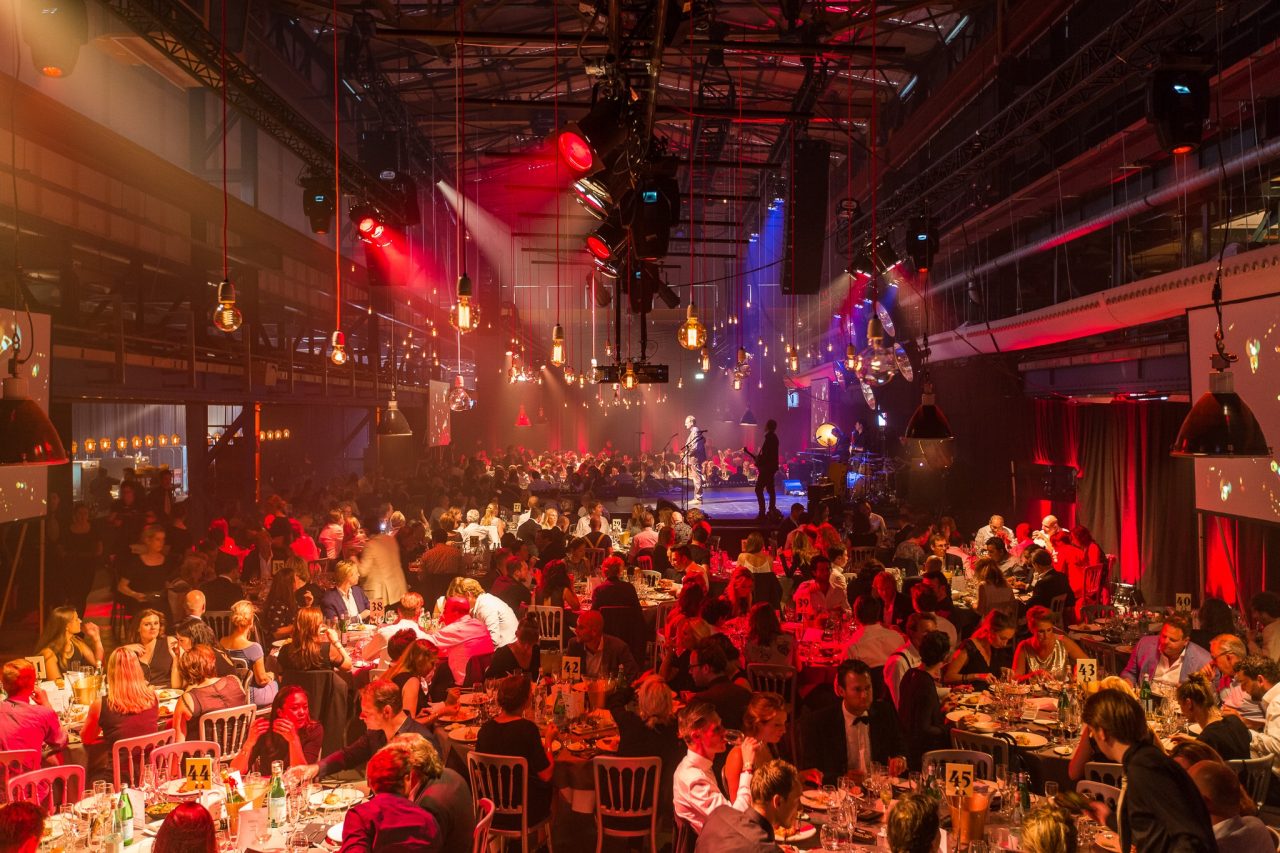 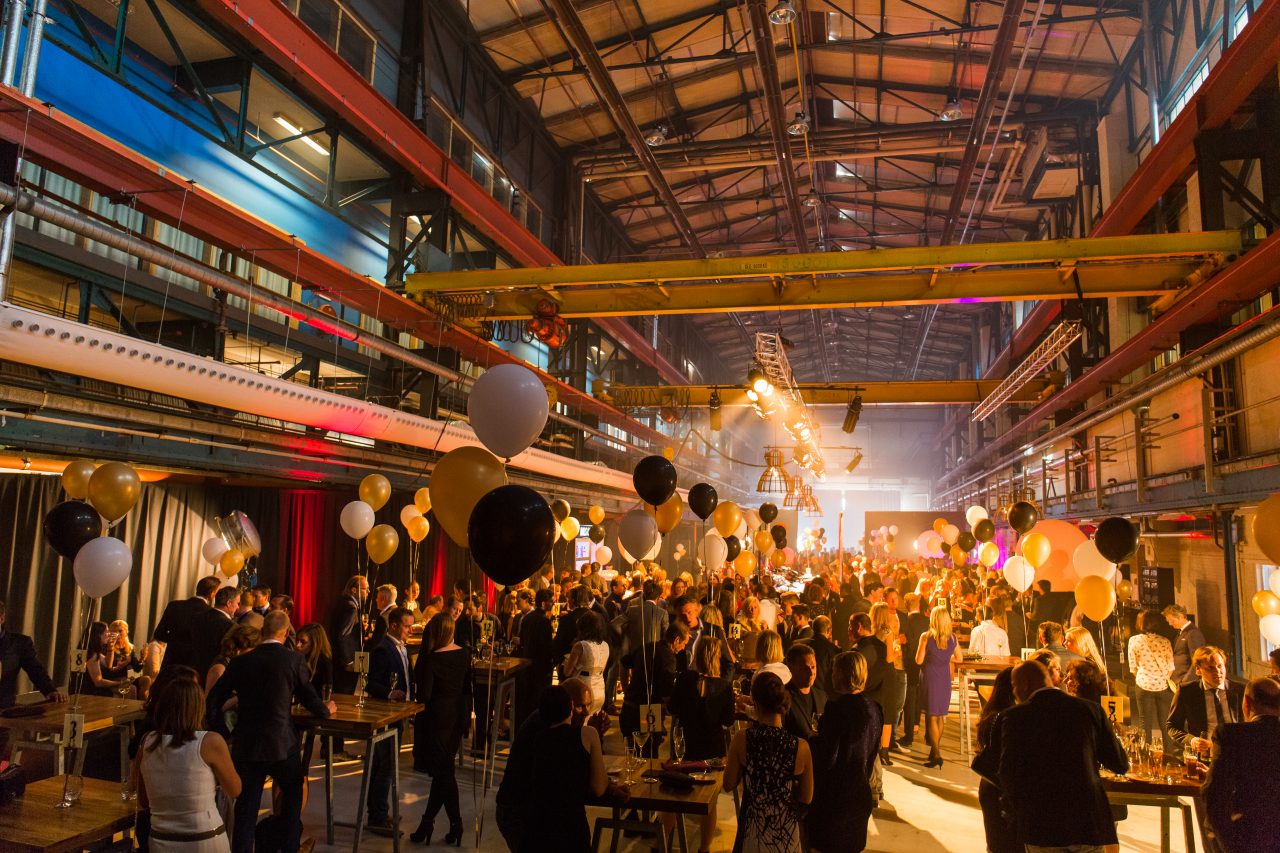 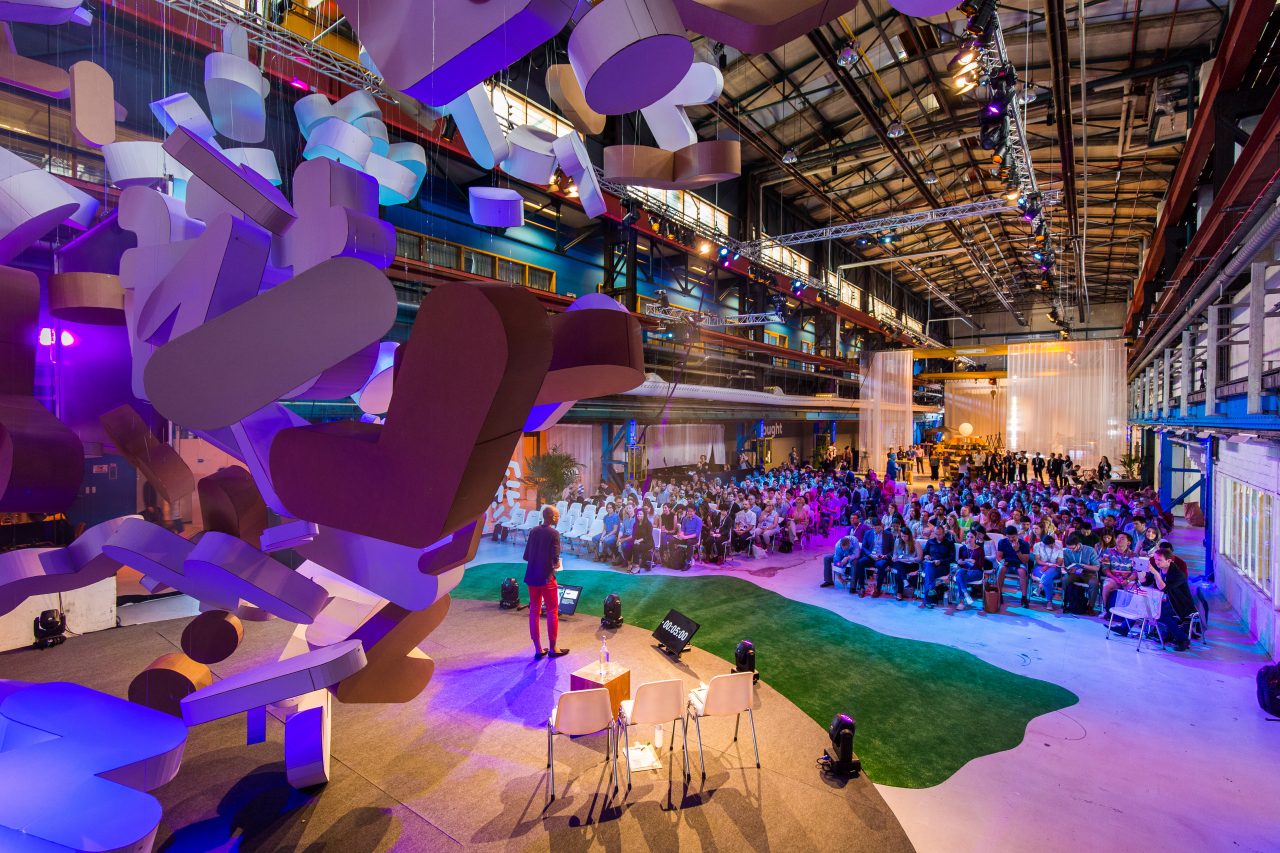 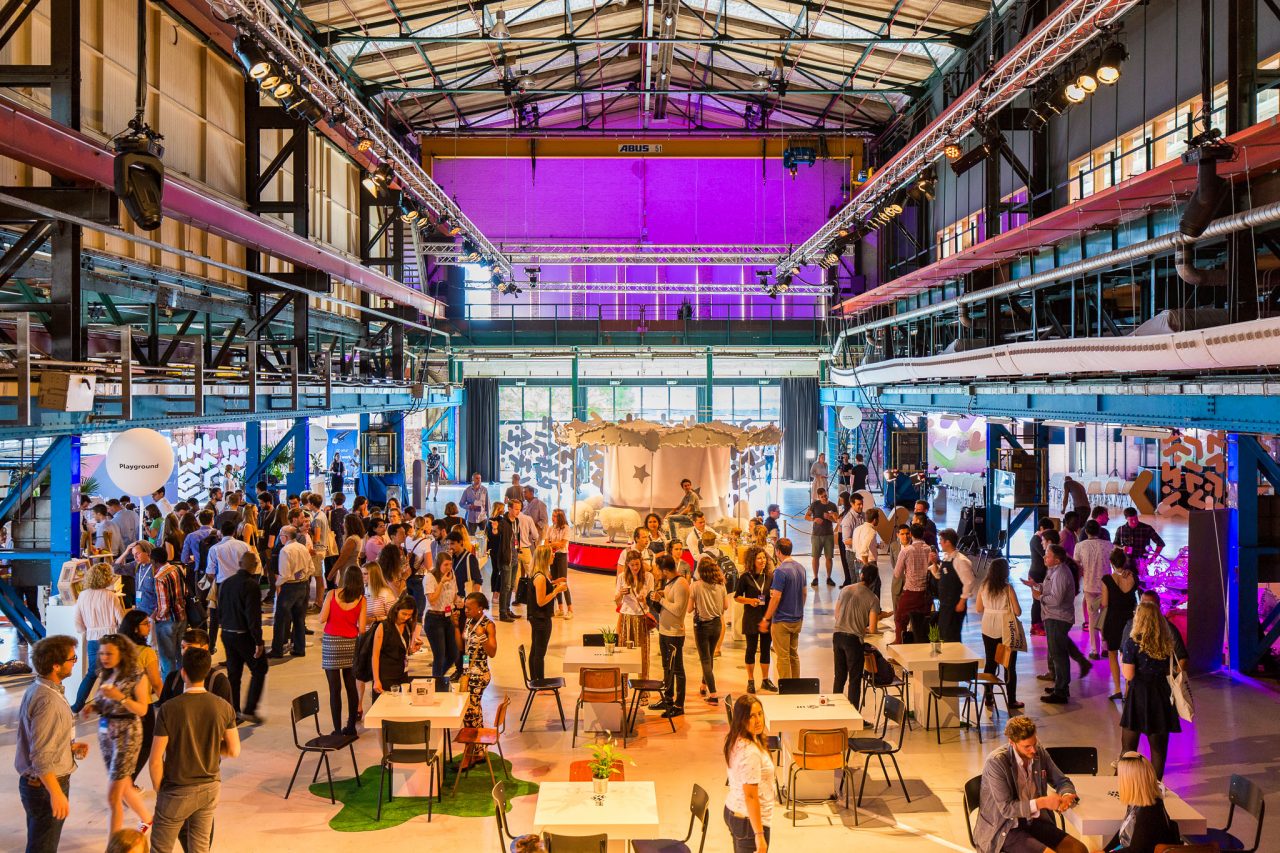 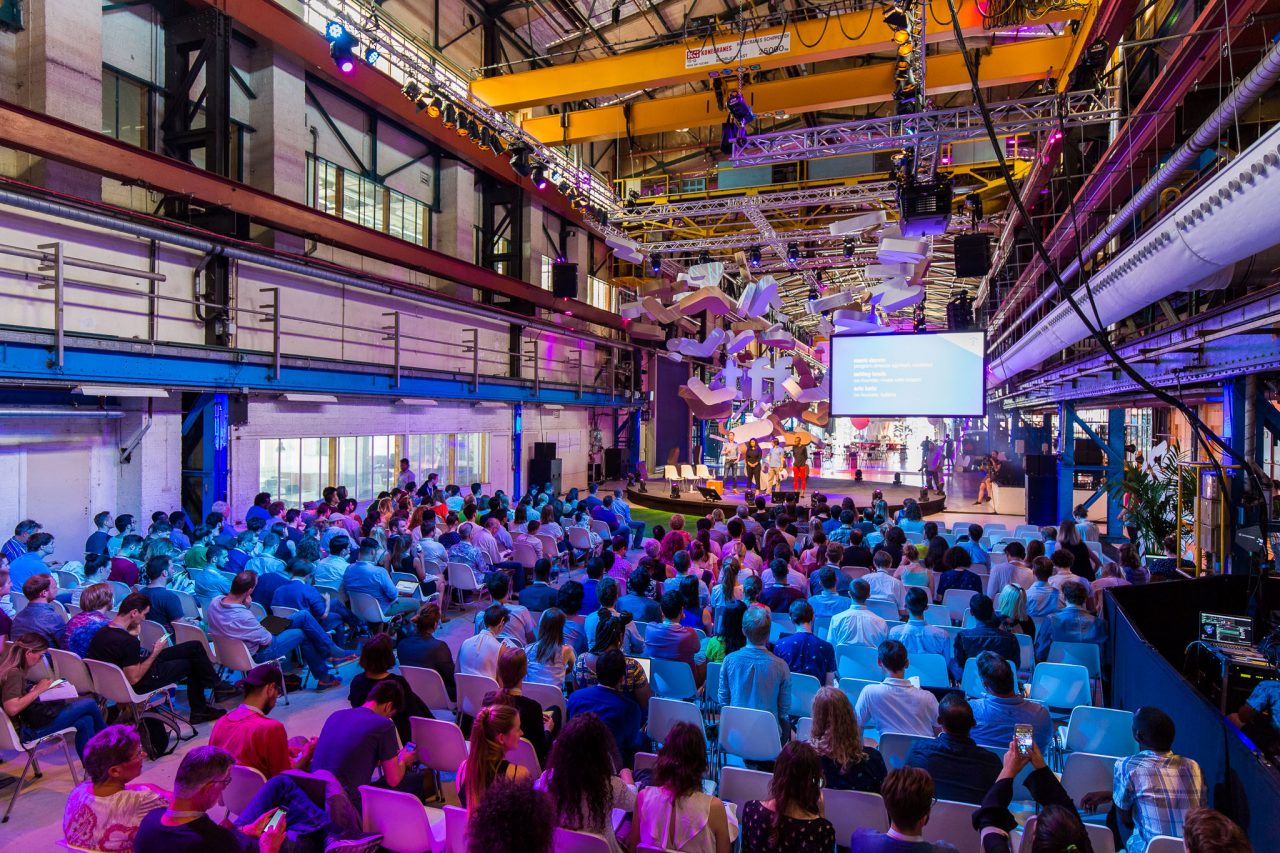 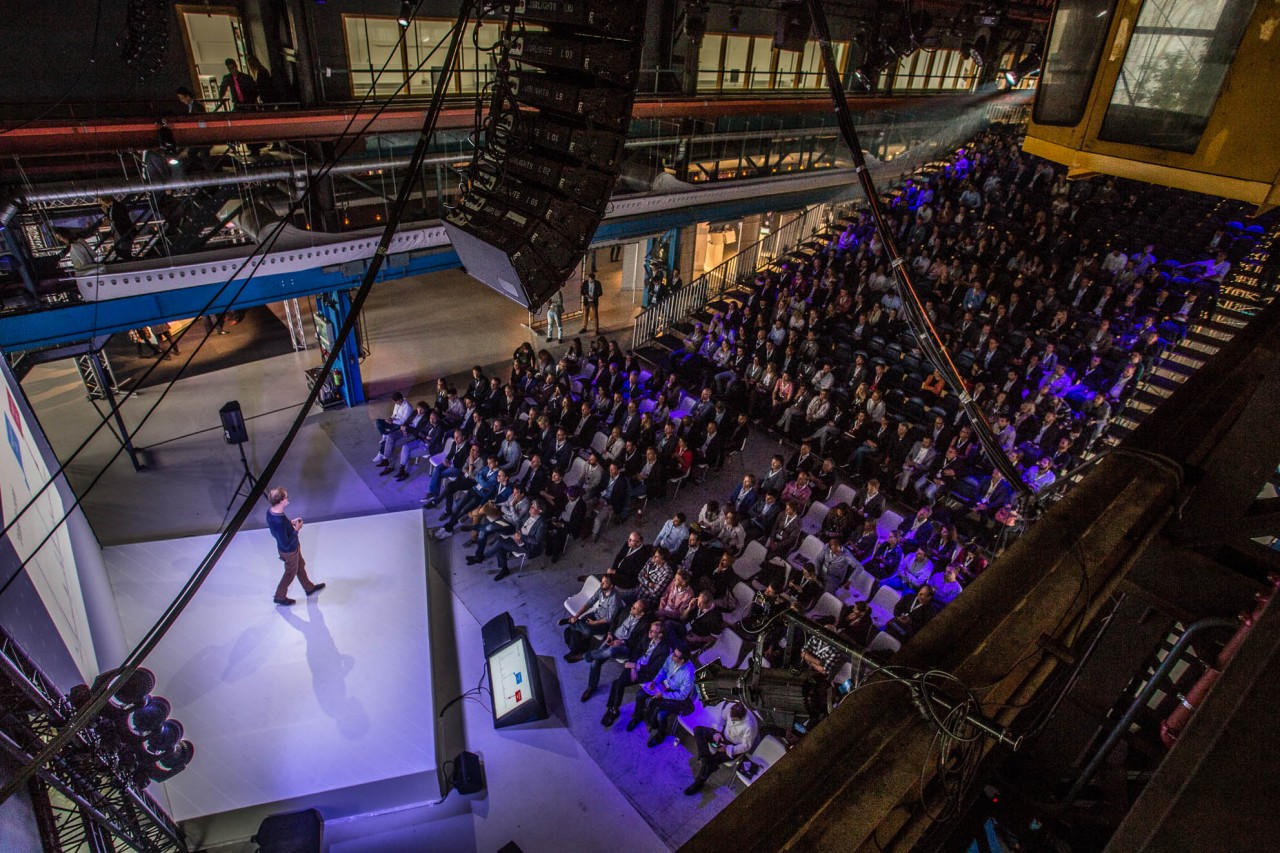 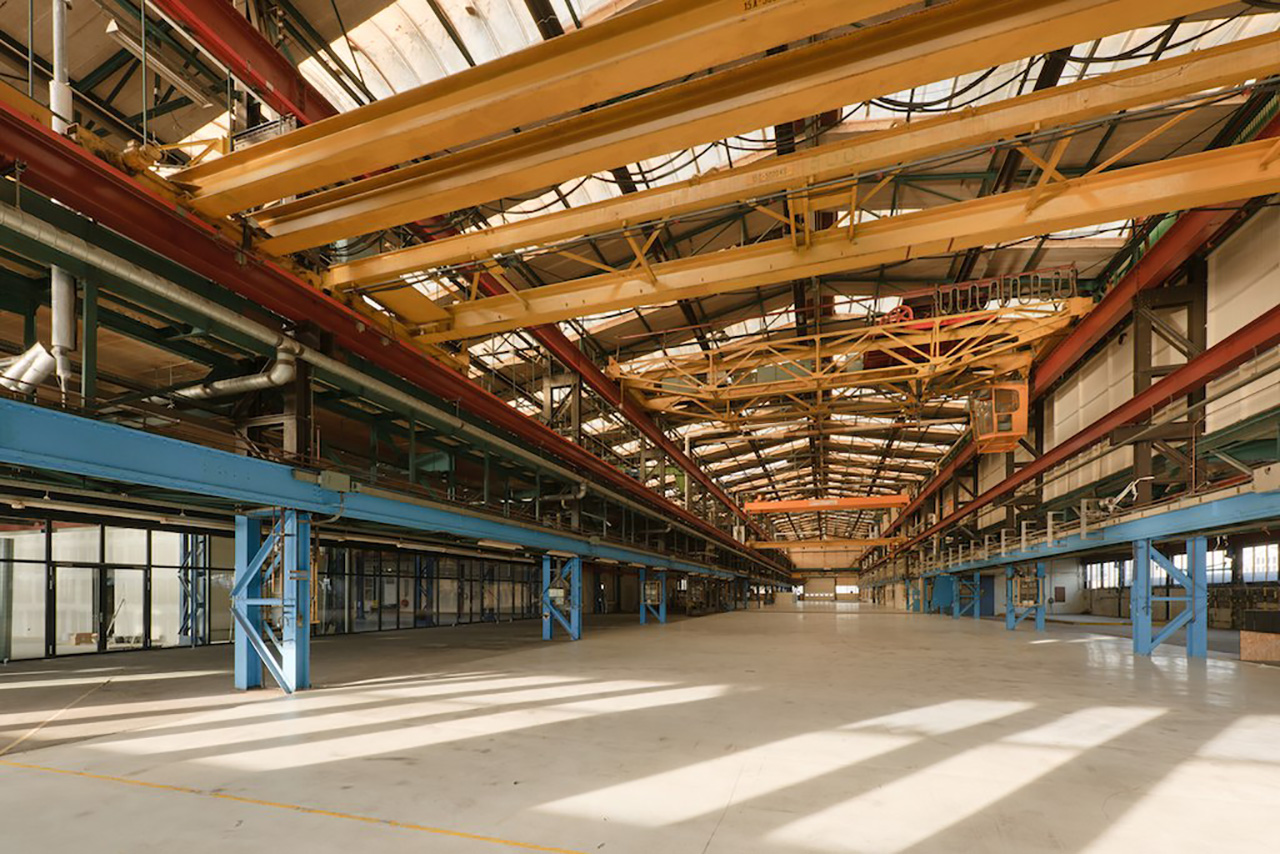 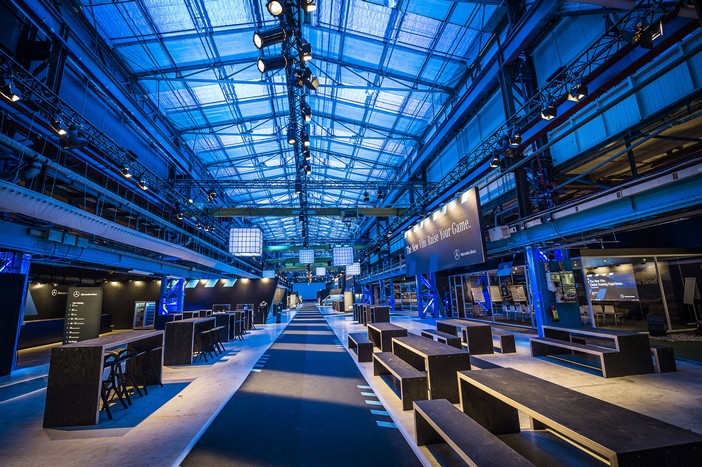 The Kromhouthal has, since its emergence in 2011, made some considerable investments. The sturdy and rugged look and feel are important to the appeal of industrial venues, but behind all the rough edges a well-cared-for event venue is of paramount importance to be successful. Moreover: Not every type of event pairs well with the industrial theme, and as a venue you want to facilitate a wide range of events.

That’s why the Kromhouthal invested in lighting, heating, insulation, good incidence of light; and so on. Thanks to all these investments, the opportunities are almost endless now: From a bare, raw and rugged industrial event venue, to a sleek and modern, almost impeccable style of decoration to create a bright and spacious vibe.

Break-out rooms are essential for flexibility in use at modern events. That’s another aspect the Kromhouthal has understood very well. Across the right side of the hall are Break-out North and Break-out South. Two basic rooms that are particularly suitable to be employed as subspaces for events, for smaller groups up to 150 people.

The Theater T01 and Studio T02 are slightly bigger than the aforementioned break-outs. The theater is used by the creative ensemble Dansmakers, that help fund their cultural activities by renting out their theater to the Kromhouthal for events. Due to the theater setup, the Theater T01 is ideal for presentations. Studio T02 is the final, large subspace that’s very suitable for presentations as well.

The backside of the Kromhouthal has recently been fitted with massive windows that look out over the IJ and the skyline of Amsterdam. It’s a spectacular view, partly due to the many boats that pass by here daily. A terrace that looks out on the IJ offers some extra room for events.

The municipality of Amsterdam is working on plans to connect the Overkant with the city by means of a bridge over the IJ, and that’s great news for the accessibility of the Kromhouthal. On top of that, the North-South metro line is coming as well, and with room for 400 cars at the frontside of the hall the accessibility of this venue leaves nothing left to be desired.

Due to the flexibility in use, the appeal of North Amsterdam and of industrial venues in general, and thanks to some excellent investments by the owners, the Kromhouthal has managed to grow into a leading event venue in Amsterdam. This is reflected by some of the customers of the venue: Google, Booking.com, TomTom and Mercedes are just a few of the major corporations that have already booked the Kromhouthal for their business events.

And that’s how a once bustling industrial strip at the IJ after years of vacancy was transformed into an equally bustling event strip. The Kromhouthal is a diverse, flexible, grand and cool event venue which has its affairs in order. It’s a textbook example of a successful conversion project in North Amsterdam.

Authentic and Full of Character: 5 Industrial Venues in Amsterdam